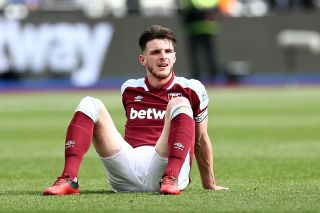 West Ham midfielder Declan Rice has been heavily linked with a summer move to Manchester United.

It is believed that new manager Erik ten Hag will be targeting midfielders and the 23-year-old England international is being considered as an option, as per The Guardian.

The England international has been in sensational form for the Hammers over the past three seasons, while also proving to be consistent in an England shirt, but he seems to have reached a new level entirely under David Moyes this term.

Moyes has suggested in the past that Rice is valued at more than £150 million by the club, which could see him priced out of a move in the summer transfer window.

Rice has transformed into a box-to-box midfielder, but he became a United target because of his performances as a deep-lying, defensive midfielder.

Moyes is desperate to keep him at the London Stadium and Rice has been advised by former Liverpool defender Jamie Carragher what to do if United come knocking in the summer.

Carragher explains in his column for The Telegraph that Rice should snub United’s interest in order to stay at West Ham.

However, Rice doesn’t take advise from Carragher and has his own brain to help him make decisions on his career.

Reliable football journalist Fabrizio Romano claims Rice has turned down a third contract offer at West Ham. The Italian adds that there’s still no agreement and Rice wants to leave in the summer.

Romano tweeted: “Exclu: Declan Rice has turned down third contract offer at West Ham. There’s still no agreement – Rice has always been committed, but he’s now open to a move this summer.”

Excl: Declan Rice has turned down third contract offer at West Ham. There’s still no agreement – Rice has always been committed, but he’s now open to a move this summer. 🏴󠁧󠁢󠁥󠁮󠁧󠁿 #WHUFC

It will be intriguing to see if West Ham cash in this summer.