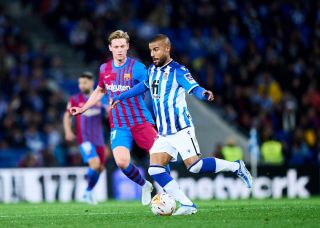 Manchester United are linked with a move to sign Frenkie de Jong from Barcelona.

It was announced that Erik ten Hag will join Manchester United at the end of the season, earlier this week, but reports in Spain now claim he wants to reunite with De Jong, who he coached at Ajax.

This will be music to the ears of many United supporters.

According to Diaro Sport, Ten Hag has listed De Jong as one of his primary targets for United this summer. It is also stated in the report that Barcelona don’t want to sell and the player doesn’t want to leave.

Could a phone call from Ten Hag changed that?

The Eredivisie has always been renowned for producing highly talented individuals over the years.

While not all of the promising young talents that come out of the Eredivisie have fulfilled their potential, it has acted as a feeder league for most of the other big European heavyweights.

After leading Ajax to a Champions League semi-final in 2019, De Jong and Matthijs de Ligt both caught the attention of the biggest clubs in the world due to their highly developed footballing attributes and intelligence. The former joined Barcelona while his ex-Ajax teammate left for Juventus.

As a midfielder, De Jong is a natural fit for the Blaugrana or, more preferably, a side playing with Ten Hag’s system.

De Jong has been a regular under Barcelona manager Xavi Hernandez but I would love to see De Jong in a United shirt.