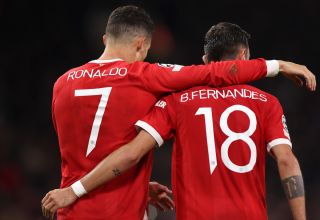 The end of each season is packed with all types of award ceremonies and although Manchester United have endured a disastrous season, some individual players have impressed.

EA Sports have revealed their nominations for this year’s Team of the Season in the Premier League, featuring three Manchester United stars.

Cristiano Ronaldo, who sits third in the scoring charts, is the only United forward nominated. Bruno Fernandes, who is having a poor season by his own ridiculously high standards, is also in the running.

⏳ Time for you to decide the @premierleague #TOTS!

There’s no surprise that no United defenders are in the vote but David de Gea, who is likely to win his fifth Player of the Year award next month, is nominated alongside four other goalkeepers.

You can choose your preferred line-up here out of 40 candidates, with the final team revealed two weeks from now.