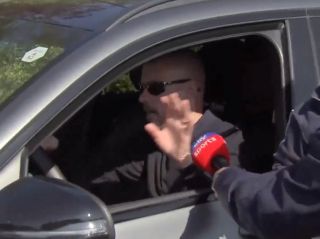 The Dutch giants are fighting for their third Eredivisie title under Ten Hag after losing the Dutch Cup final against PSV Eindhoven last weekend.

It would be fair to say he did not appreciate it when Sky Sports reporter Gary Cotterill tried to ask him a question about his new job when he was driving towards Ajax’s training complex.

In the middle of it all, the reporter spoiled a golden opportunity for a family of Ajax fans to take a picture with the departing manager.

🗣 "It's surprising to me that he looked surprised that the biggest football channel in England came to see how he was, maybe a little bit of adaption coming to him."@gary_cotterill on Erik ten Hag swerving his questions about Man United pic.twitter.com/nPPMLFqgC2

With five games to go in the Dutch league, Ten Hag’s reluctance to answer questions on United can be excused.

He has already signed a three-year deal with the Red Devils.