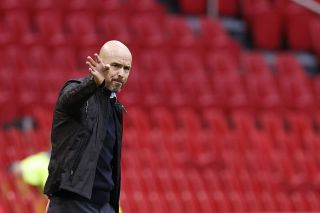 Erik ten Hag was confirmed as Manchester United’s permanent successor to Ole Gunnar Solskjaer earlier this week and has now commented on the appointment, insisting he will not change his view on coaching after sealing the coveted job.

Despite the early confirmation, the 52-year-old still needs to see through the end of the season and is chasing a third consecutive Eredivisie title, with Ajax four points clear of the chasing pack with five games remaining.

The club’s star striker, Sebastien Haller, was quizzed on his manager earlier on Friday, insisting that ‘nothing happens by random’ when you’re working with Ten Hag.

Ten Hag has quite the job on his hands at Old Trafford but he has now admitted that he will stay true to his beliefs and not become the latest victim of player power at the club.

“I think so,” he told Trouw, via Sport Witness, when asked he if could handle the egos of the Cristiano Ronaldos of this world. “But I will remain myself in that too. I will not change my view on coaching.

“The material always determines how you play, but I indicate the requirements that come with it and the standards. I tell who has what task and who does not meet it, will be told that, regardless of who it is. I make no concessions in that regard.

“I set requirements in advance about how I want to work. If they aren’t granted, I won’t. I am ultimately responsible and accounted for the results. I don’t want to be the sole ruler, I stand for cooperation, but control in transfers is a condition for me.”

SN’s verdict…
It’s becoming increasingly clear that the sizeable task Ten Hag has to deal with is not lost on the former Utrecht boss. The issues at United are glaringly obvious but supporters can take comfort in knowing that they have a manager with a clear upwards trajectory in charge of things.

All of the previous managers since Sir Alex Ferguson’s retirement have miserably failed, with Jose Mourinho boasting the best win percentage out of all of them. Ten Hag will be hoping to do far better and if his days at Ajax are anything to go by, the Old Trafford faithful are in for one good ride.