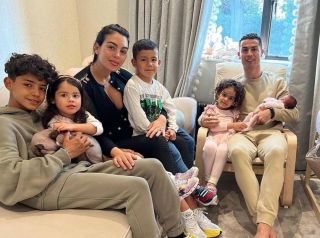 It has been an extremely difficult for Cristiano Ronaldo and Georgina Rodriguez.

The Manchester United star shared a social media update shortly after their baby girl made the journey back from hospital following her birth on Monday.

A statement released on Monday confirmed one of the couple’s twins had died, which led to a 1-minute applause at Anfield on Tuesday night. Ronaldo thanked Liverpool fans for putting their rivalry aside to show support on the night.

Ronaldo posted a photo for his 430 million Instagram followers last night shortly after their baby girl arrived home from hospital.

He wrote: “Home sweat home. Gio and our baby are finally together with us. We want to thank everyone for all the kind words and gestures.

“Your support is very important and we all felt the love and respect that you have for our family. Now it’s time to be grateful for the life that we’ve just welcomed into this world.”

We send our love and condolences to Ronaldo’s family.