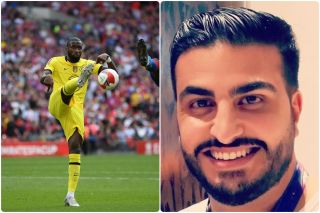 Saif Rubie, an intermediary who assisted Antonio Rudiger’s move from AS Roma to Chelsea, has teased transfer talks with Manchester United on social media.

In 2017, Chelsea spent £29 million to secure Rudiger’s signature on a five-year contract, as per BBC Sport. That deal will soon expire and United could be a potential destination.

Rubie played a significant role in his switch to Chelsea, acting as an intermediary who contacted Rudiger’s agent Sahr Senesie to kickstart negotiations.

There is a good chance that Rubie will be involved in Rudiger’s next move as he holds talks with a host of European heavyweights ahead of his Chelsea exit.

Rudiger is reportedly a transfer target for United, especially after the appointment of Ten Hag, according to the Daily Mirror.

Now, Rubie may have hinted at a move to Old Trafford, posting a picture of Sir Alex Ferguson with the caption: “Let’s see if I can help revive this sleeping giant #gloryglory,” as seen in the tweet below.

"Let's see if I can help revive this sleeping giant #gloryglory"

Rubie may just be stirring the pot or trying to push other clubs to increase their offers.