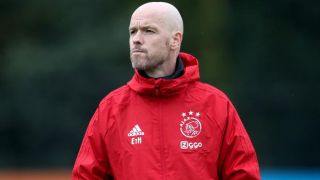 Manchester United have today confirmed the appointment of Erik ten Hag as their new manager.

The Dutchman will take over at the end of the season and is currently aiming to win his third Eredivisie title as Ajax manager.

United fans have been reacting to the news on Twitter all day. We’ve listed some of the best tweets below:

Not happy with a 13-0 win. The Premier league is not ready. pic.twitter.com/eO6mmHjy1d

Erik ten Hag signed, sealed and delivered with 5 games still left in the season. Very unlike Manchester United to have our shit in order. Hopefully it's the start of acting like a big club again.

How I hope Erik ten Hag walks into the United dressing room pic.twitter.com/74mMUTraN0

Ten Hag has made it clear to #MUFC he will not be in the thick of the commercial operation as previous United coaches have. This was part of negotiations. ETH wants to be in charge of the football project & nothing else. This is a big cultural shift for United. #WelcomeErik pic.twitter.com/aolQFcmhVZ

Absolutely delighted with Ten Hag coming in as manager, he is the perfect blend of positional play, attacking football & pressing. I can’t wait to look forward to watching United again. It’s been too long. It will take time, but have faith. #MUFC 🔴🔴🔴

Give Erik ten Hag time. Give him backing with transfer funds. Give him a squad full of hungry players with potential. Give him Rangnick as a sounding board, Murtough as an enabler. Let him finish 7th or 8th in his first season without panicking. Give him time. #mufc

Ten Hag assembled two good teams at Ajax, preaches good football and develops young players. Will be interesting to see how he copes with the leap from a team with six Premier League rejects to world sport's most scrutinised institution. Has to have total authority at #mufc.