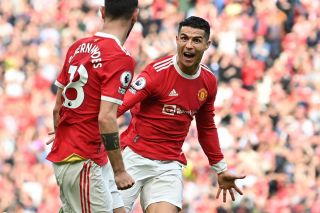 Manchester United are all but out of the top four race following the shocking 4-0 defeat against Liverpool on Tuesday night.

Cristiano Ronaldo missed the trip to Anfield after the death of his newborn son on Monday.

Both sets of supporters put rivalry aside to show their support to Ronaldo and his family with a 1-minute applause 7 minutes into the game.

However, Ronaldo returned to training today.

On the night, United offered nothing in attack – as it usually the case whenever Ronaldo is absent from the team.

That has not stopped pundits from describing Ronaldo as “the problem” in what has been a terrible campaign for the team.

The Sun has done calculations on United’s season to see where team would be positioned in the Premier League table without Ronaldo’s 15 goals and three assists, earning a total of 15 points.

United are currently sixth in the table (54 PTS, 4 GD) and were dealt another blow in the race for top four on Wednesday night as Arsenal beat Chelsea 3-2 at Stamford Bridge. That result saw the Gunners move three points clear of United with a game in hand.

According to the newspaper, without the 37-year-old, Ralf Rangnick’s side would be 12th in the table with just 39 points after winning only nine games. Our goal difference would be -14.

The Sun did their research after Arsenal fan Piers Morgan claimed United would be in a relegation scrap without Ronaldo – but the stats suggest he is wrong.

Manchester United without Ronaldo this season would be facing a relegation battle. Absolutely abysmal performance tonight.