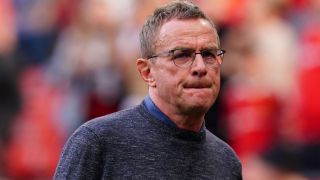 Ralf Rangnick has revealed Manchester United could sign up to ten players in the summer as part of a rebuild.

The Red Devils suffered a 4-0 defeat to Liverpool at Anfield last night and it was clear, with the gulf in class on the pitch, that United need to reevaluate their recruitment process.

Erik ten Hag will soon be tasked with taking over the team, but without the right level of recruitment, how can he challenge the likes of Jurgen Klopp and Pep Guardiola?

United are set to lose Paul Pogba, Jesse Lingard, Nemanja Matic, Edinson Cavani and Juan Mata at the end of the season.

Rangnick has confirmed that there will be many changes at Old Trafford as the club looks to turn things around.

The 63-year-old told reporters after last night’s match (via The Sun): “There will be a rebuild for sure.

“That was obvious in the first three or four weeks for me.

“There could be six, seven, eight, maybe ten new players.”

Let us know in the comments who you would like to see join United this summer?