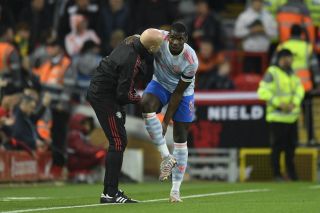 Manchester United could be without Paul Pogba for their next two matches against Arsenal and Chelsea.

Pogba came off after the first 10 minutes against Liverpool at Anfield on Tuesday night, shortly after receiving treatment following a fifth-minute opening goal from Luis Diaz, who kick started a 4-0 win at our expense.

This left Nemanja Matic as United’s only fit central midfielder and the Serb announced last week that this would be his final season at the club.

The 29-year-old is running down his contract at Old Trafford in order to leave on a free in the summer.

It was clear that the away section at Anfield were not fully behind Pogba after he cupped his ears to the Stretford End on Easter Sunday.

The relationship is broken and I, for one, want Pogba out of the club as soon as possible.

Interim manager Ralf Rangnick confirmed after the match that Pogba picked up a calf injury and is unlikely to feature in the next two matches.

“He seems to have problems with his calf, quite similar to Fred,” Rangnick told reporters, as per the Manchester Evening News.

“Right now I don’t think he will be available for the next two games.”

This will raise questions over whether Pogba has made his final appearance for United.

United need at least four points from their next two games, and that will still cut it tight in the race for top four because we are still depending on results elsewhere.

Maybe it’s time to throw Hannibal Mejbri into midfield. At least he showed some heart when he came off the bench against Liverpool.