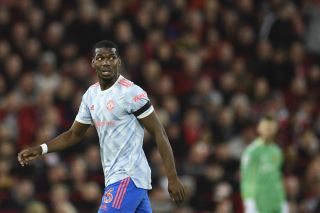 Manchester United midfielder Paul Pogba is set to leave the club on a free transfer this summer after running his contract out for the second time in 10 years.

The 29-year-old has cut a frustrating figure for most of his six years at United since his return in 2016 but the Frenchman’s messy stint at the club is finally about to end.

Pogba’s relationship with supporters has been fractured for several years and now the scenes of United’s 3-2 win over Norwich last week confirmed it, with fans turning on the player as he made his way off the pitch.

Despite clinching a late win against the Canaries, the Old Trafford faithful made their feelings towards Pogba clear and the midfielder wasted no time in gesturing back by cupping his ears to their boos.

According to Sky Sports, that exchange is said to have hurt Pogba and he is now increasingly likely to leave the club after failing to commit his long-term future. Furthermore, in what could be a heavy blow to the club, he could join a Premier League rival as the report states Pogba has not ruled out staying in the country.

Pogba could also have played his last minutes for United in his brief appearances at Anfield. He was substituted with an injury after roughly 10 minutes and Ralf Rangnick has confirmed that he doesn’t expect the midfielder to be available for the games against Chelsea and Arsenal.

SN’s verdict…
Manchester United and Pogba are both at fault for how things have unfolded in the last six years but Pogba’s refusal to associate himself with the club, the willingness to flirt with other clubs, and off-pitch antics have done very little to mitigate suggestions of a rift.

United fans certainly won’t be losing any sleep over his exit but if he thought the reception against Norwich was bad, he’ll have an even worse one if he returns to Old Trafford with another Premier League side.