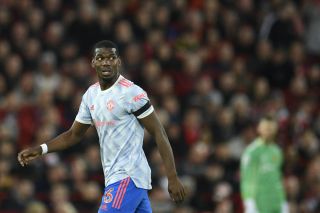 The Easter period was a perfect summation of Paul Pogba’s second stint at Old Trafford. Exiting the field to jeers, catcalls, and very explicit directions on where to go by United fans, followed by limping out of another humiliation at the hands of Liverpool. It’s exactly what Pogba has been in six years, limp, and the mutual antipathy between player and fans has only grown.

It’s an enormous shame. Pogba’s glittering return in 2016 was meant to signal United’s return to the summit of English football. What everyone – including Pogba – got instead was false hope and a return to the mean for a club that has become a graveyard for careers and places selling products above all else.

Wonderfully gifted as Pogba is, he is ultimately a luxury footballer. The fabulous decorative finish to a grand house which United forgot to lay the foundations to The Frenchman is by no means the root of United’s problems, but he is a very expensive part and symptom of them.

Like many United players who have come into the club since Alex Ferguson retired, Pogba was sold a lie. Promised an elite team with trophies, he instead rocked up at a Heritage Project with a crumbling stadium that focussed solely on acquiring household names for social media traffic and attracting new sponsors.

Within two years of his arrival, he was at war with the poisonous Jose Mourinho and rightly or wrongly, alienating United fans en masse, something he has continued to do with his entourage as time has gone on.

While blaming Pogba for all United’s ills is unfair and patently ridiculous he hardly helps himself. His languid style, public courting of other clubs and repeated, deliberate undermining of successive managers has understandably infuriated fans. Pogba’s reaction to the fans against Norwich over Easter Weekend suggests he feels harshly treated in this regard, but he could probably demonstrate a little empathy in this regard.

Furthermore, for all the poor judgement by the club, there is no excuse for a consistent lack of effort over six years. A regular failure to even consider tracking back, pressing the opposition, or helping a teammate is something Pogba has been guilty of, time and time again. Like many of his teammates, he clearly in unhappy with how the club behaves, but at some point, professional pride must kick in for the sake of his own career.

This is not something contained to club form either. His slackness and lack of concentration contributed heavily to France’s absurd European Championship implosion. Without the cover from the likes of Kante and Matuidi, Pogba’s flaws were ruthlessly exposed by even a half-decent team in Switzerland.

The mercurial Frenchman may feel hard done by, but the reality is, he is not a world class footballer and has been damned by something he is ultimately not capable of. His glorious touches, highlight reel passes and wonderful flourishes are a marvellous accoutrement to a successful team from a talented squad player but nothing more.