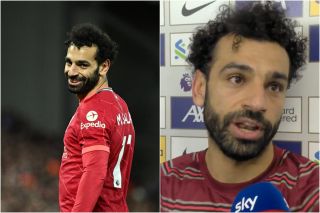 Liverpool attacker Mohamed Salah has provided clarity on the comments he made shortly after full-time last night, where he claimed that Manchester United made it easier for the home side in their 4-0 win on Tuesday evening.

The Egypt international scored twice in the game and rubbed salt in United’s wounds after the game, suggesting that Ralf Rangnick’s men made it easier for them.

“I think they make our life easier in the midfield and the back,” he said after the game. “They always try to give us the ball in a situation like one vs one.

The 29-year-old has now clarified his post-match comments on social media, insisting he was talking about his own team and not Manchester United, as seen below.

I meant our midfield, and our defence, make it easy for us. I was not talking about the Manchester United players whom I respect. https://t.co/WjaQfgZNw6

“I meant our midfield, and our defence, make it easy for us. I was not talking about the Manchester United players whom I respect,” he said in a short statement on Twitter.

SN’s verdict…
We’ll never know for sure if Salah is backtracking on the words or if their true meaning was just lost in translation but regardless, the United players did make it easier for Liverpool.

To have an opposition player come out and make such a statement just minutes after the game must be incredibly insulting as a professional footballer but based on their performances this season, you’d struggle to imagine any of these United players batting an eye.

Truth be told, the season is almost over and United are highly unlikely to qualify for the Champions League next season – and that’s obvious on a weekly basis. I wouldn’t quite say they’ve downed tools just yet but we’re treading dangerously close to that.