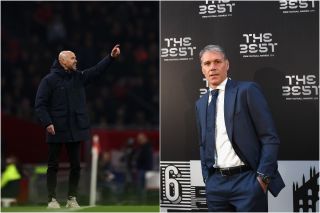 Erik ten Hag is set to become the next permanent Manchester United manager and is likely to be confirmed as the successor to Ole Gunnar Solskjaer before the end of the season.

The news of Ten Hag’s appointment has been met by fanfare, with a large section of the club’s following happy with the news. That is, however, all there is to look forward to at Manchester United right now.

Ten Hag will join a broken club with a dysfunctional team, something Dutch legend Marco van Basten has been quick to point out as he raises his concerns over Ten Hag’s move to Old Trafford.

“The difference between Liverpool and Manchester United is huge. They walk around like beaten people. This is one of the biggest clubs in England and not one of them really gets excited,” he told Ziggo Sport, via Sport Witness.

Ten Hag’s move to United is edging closer with each passing day and speculation that an announcement is looming increased after images of the former Utrecht boss at an agency office emerged.

SN’s verdict…
It goes without saying that Ten Hag has an extremely big job ahead of him, with the scales tipped against him as things stand. United’s three permanent managers post-Sir Alex Ferguson have all failed to different degrees and Ten Hag will need to get a lot of things right to end that chain.

The current crop of players at the club hardly fit the profile of players he’s enjoyed success with in the past and although there are reports of a big transfer kitty, fans will need to be patient.

The scenes of last night’s 4-0 defeat to Liverpool were ugly and it’s no surprise that they provoked those comments out of Van Basten but hopefully, Ten Hag becomes the latest Dutchman to succeed at Old Trafford.