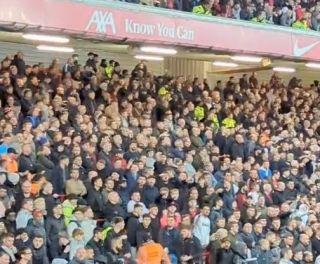 Offensive chants were heard from both sections of the crowd at Anfield, however, a video surfaced online showing a number of United fans singing: ‘The Sun was right, you’re murderers’.

The stadium did unite to show support for Cristiano Ronaldo on the 7-minute mark after the Manchester United star’s newborn son passed away.

In a statement, United promised to speak to fan groups about ‘educating’ fans, in a bid to stop distasteful chants about the dead at football matches.

“Manchester United stands in solidarity with Liverpool FC and its fans in remembering the Hillsborough disaster,” a United spokesperson said, as per Simon Stone. “Offensive chants about the tragedy are unacceptable and we will work with our supporters’ groups to educate fans on the issue.”

Man Utd response to offensive chants at Anfield: “Man Utd stands in solidarity with Liverpool + its fans in remembering victims of Hillsborough disaster. Offensive chants about the tragedy completely unacceptable + we will work with supporters’ groups to educate fans on issue”