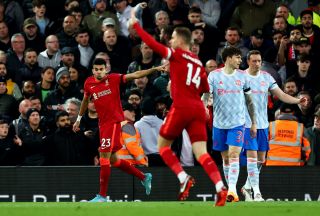 Liverpool have become the first team in the history of the Premier League to score 9 goals against Manchester United in a single season.

Jurgen Klopp’s side beat the Red Devils 5-0 at Old Trafford back in October 2021 before securing a 4-0 win at Anfield on Tuesday.

Another difference between the two sides is they challenge for league titles and seemingly quadruples, while we fight for a place in the top four.

It’s not good enough and something needs to change.

On top of this, Mohamed Salah has become the first player to score five goals against United in a single campaign.

Liverpool won both top-flight games against United without conceding a goal for the first time since 1963/64.

Hopefully Erik ten Hag has a better record against the Scousers next season!