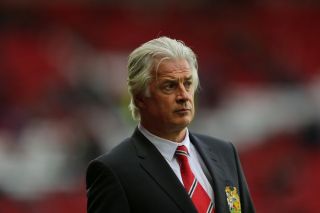 There are more changes being made at Manchester United after two leading scouts left the club.

According to The Athletic, Jim Lawlor and Marcel Bout (pictured above) have both departed the Premier League side.

Lawlor, the club’s former chief scout, joined United in 2005 and was promoted to chief scout in 2014. He oversaw United’s scouting for the past 16 years during which the team has had a dismal recruitment record.

For that reason, I don’t think he will be missed. We also have a new chapter under Erik ten Hag to look forward to.

On the other hand, there is Bout, who worked initially as a coach under Louis van Gaal.

The decision to retain Bout as a scout left many baffled because he worked at the club while Van Gaal made 13 signings and every single one of them were subject to criticism.

It wouldn’t be wide off the mark to suggest Sergio Romero was the most successful recruit during the Dutchman’s reign. And that is telling…

However, United are saying goodbye to two big voices in their recruitment team, which has been heavily criticised in recent years.

Manchester United told The Athletic in a statement: “Jim Lawlor has decided to step down from his role as chief scout in the summer after 16 years with the club.

“During that time, Jim played a key role in the development of multiple trophy-winning Manchester United teams and was an important source of guidance to Sir Alex Ferguson and each of the managers who have followed him.

“Jim leaves the club with our warmest thanks for his significant contribution and our very best wishes for the future.

“Marcel Bout has departed from his role as head of global scouting after eight years with the club. A respected figure within and outside of Manchester United, Marcel has played an important part as an assistant coach and in the strengthening of our scouting capabilities in recent years.

“Marcel leaves the club with our warmest thanks for his significant contribution and our very best wishes for the future.”

It is understood that John Murtough is running the ship in terms of football matters at Old Trafford, with Richard Arnold focusing on the commercial front and building a bridge between the football people and the Glazer family.

A lot needs to change at United and I am not confident that we have the right owners to fix the biggest problems that exist at Old Trafford.

We shouldn’t forget that the stadium is falling apart.