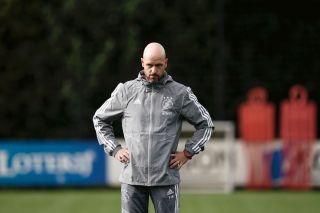 Manchester United are getting ready to announce the arrival of Erik ten Hag, according to reports. The 52-year-old has been heavily linked with a move to Old Trafford and it now seems like official confirmation is imminent.

Ralf Rangnick assumed temporary charge of the side following Ole Gunnar Solskjaer’s sacking in November and although Ten Hag would have preferred to take over under better circumstances, he’ll be eager to have a stab at turning United’s fortunes around.

According to The Telegraph, official confirmation is expected within 24 hours but should there be a delay, it could be pushed back until Monday to not disturb Ajax’s push for a third straight domestic title.

That would fall in line with another report from Wednesday, which claims that United are expected to confirm Ten Hag’s appointment after the game at Arsenal on Sunday.