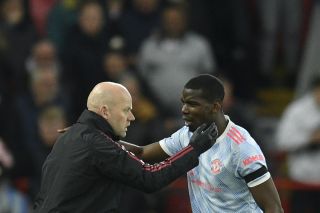 According to Sportsmediaset, Juventus have fallen out of the race to sign Paul Pogba on a free transfer this summer.

It sounds like Pogba’s wage demands are putting off potential buyers.

The report claims Juventus cannot afford the midfielder’s full salary – despite getting Cristiano Ronaldo off their wage bill and opting not to renew Paulo Dybala’s deal when it expires in the summer.

Real Madrid and Paris Saint-Germain remain in the running for the 29-year-old.

Pogba came off injured 10-minutes into last night’s 4-0 defeat against Liverpool at Anfield.

After the match, Ralf Rangnick confirmed that the French midfielder could miss the next two matches against Arsenal and Chelsea.

It remains to be seen if Pogba has played his last game for United.