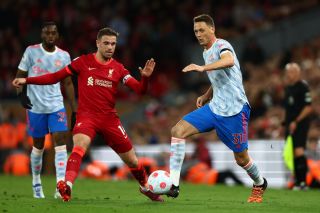 Jose Mourinho has been offered the chance to reunite with Manchester United midfielder Nemanja Matic, according to reports. The former Serbia international is set to leave the club this summer after five years at Old Trafford.

Matic confirmed on social media last week that he would be leaving the club this summer, with the option to extend his contract for a final year set to be overlooked. According to reports, the midfielder could now be set for a reunion with the man who brought him to Manchester United in 2017.

That’s according to CalcioMercato, via Sport Witness, who claim that the 33-year-old has been offered to Mourinho’s side, with the Italian club said to be considering whether to see the deal through.

They say that Matic’s high wages could be a stumbling block but the former Chelsea and Benfica star ‘would love’ to reunite with Mourinho. Roma are said to be contemplating it but any reservations over a deal would be over Matic’s age.

SN’s verdict…
Mourinho has a tendency to sign players he’s worked with in the past and it goes without saying that Matic is one of his favourites across two clubs. After bringing him to Chelsea in 2014, he made sure to work with him again at United.

Throughout their one-and-a-half years together in Manchester, Matic was one of his most-used players and a move to Italy would make sense.

From a Manchester United viewpoint, there’s not a lot to gain from any outcome. Matic will leave on a free transfer so United won’t be owed any transfer fee. His wages will, however, be freed up and could be used to bring someone else in.