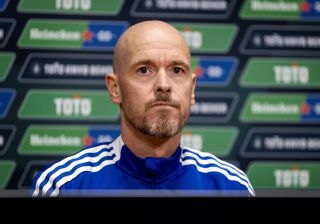 Erik ten Hag is set to take over as the next permanent manager at Manchester United, becoming the successor to Ole Gunnar Solskjaer following Ralf Rangnick’s short stint as interim boss.

The 52-year-old is currently seeing out his final season at Ajax and is expected to be announced as the new manager of United imminently, possibly before the end of the season.

As if United’s problems weren’t glaringly obvious already, last night’s 4-0 defeat to Liverpool really underlined what Ten Hag needs to accomplish if he’s going to be successful at Old Trafford.

One of those things is a complete revamp of the current crop of players, with many first-team regulars set to depart the club over the summer.

As per The Mirror, up to six players are set to leave on free transfers. Paul Pogba, Nemanja Matic, Juan Mata, Lee Grant, Edinson Cavani and Jesse Lingard are named as confirmed exits.

Furthermore, there could be a host of additional names set to be on Ten Hag’s chopping block. Aaron Wan-Bissaka, Marcus Rashford, Eric Bailly, Phil Jones, Alex Telles and Anthony Martial could also leave.

The exit of all those players, 12 to be exact, would free up a huge amount of cash for Ten Hag to begin his revolution at United, with Donny van de Beek named as one player who could benefit from his arrival.

There are further claims that United will be busy in the transfer market, with the club making a whopping £200m available to Ten Hag – a sizeable transfer kitty. Should he manage to spend it all in one go, he would become the first United manager to do so.

SN’s verdict…
United’s desperate need for a structural revamp is obvious and the man tasked with restoring the club’s pride, Ten Hag, has a lot going against him as things stand.

United’s hoarding culture, which dates back to Sir Alex Ferguson’s time at the club, has violently backfired and it would be some accomplishment for Ten Hag if he manages to address it.

You’d forgive United fans for their skepticism considering all of the broken promises over the last few years but with Ten Hag, there’s at least something new and fresh to look forward to.