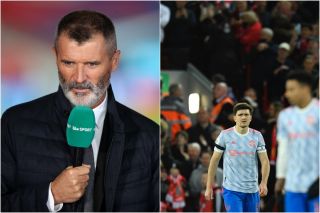 Manchester United hit a new low on Tuesday evening as they succumbed to yet another embarrassing defeat to Liverpool this season. Ralf Rangnick’s side went into the encounter as underdogs but they didn’t stand a fighting chance and lost by a whopping four goals to nil.

Two goals on either side of half-time confirmed United’s heaviest defeat at Anfield since 1990 and an aggregate score of 9-0 across the two meetings between the sides this season.

Roy Keane has hardly been a fan of this United side in recent years and his post-match assessment of the club was uncharacteristically sad, rather than filled with anger.

Roy Keane "There was anger earlier in the season, now it's just sadness." pic.twitter.com/zhiNaku0tS

“There was anger I think earlier in the season, now I think it’s just sadness. You look at the team today, I don’t think there was any heart, there was no soul, there were no leaders,” Keane said on Sky Sports, via Football Daily, as the away end was being shown.

“They lack real quality. They’re so far off. You look at the United fans tonight, they’re not surprised with the scoreline. They probably kept going till the end but you just felt Liverpool could score every time they went forward.

“It’s so sad to see United, it’s not the club I played for. It doesn’t reflect what Man United stood for, it’s chalk and cheese. I don’t see a United team out there fighting, playing with pride.”

It’s hard to see where United are supposed to go from here. Qualification for next year’s Champions League is highly unlikely. The only silver lining is that we’re now one game closer to the end of the season and United fans will be desperate for Erik ten Hag to revolutionise this club.