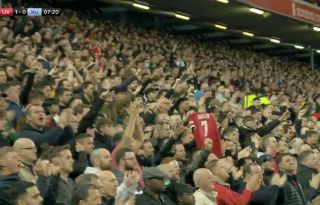 Manchester United are facing Liverpool on Tuesday and went into the game as heavy underdogs, with their bitter rivals chasing an unprecedented quadruple.

Ralf Rangnick was hardly blessed with options for the game, with several first-team regulars unavailable due to injury or personal reasons.

One of those players is Cristiano Ronaldo, who tragically lost his newborn son on Monday. It was announced earlier on Tuesday that the superstar forward would be absent for tonight’s game, which is perfectly understandable.

Liverpool took the lead after five minutes but the scenes on seven minutes were truly heartwarming. Liverpool and Manchester United fans united across the entirety of the seventh minute to show their solidarity with Ronaldo, as seen below.

7-minutes in, Liverpool and Man United fans show their support for Cristiano Ronaldo and his family. ❤️ pic.twitter.com/5TCxj5oxKO

All of Anfield stands to applaud in seventh minute. “Viva Ronaldo” from away section. YNWA from Kop.#MUFC pic.twitter.com/hWBWMuCiAl

The willingness to put that bitter rivalry aside from both sides was heartwarming. Liverpool fans sang the signature song ‘You’ll never walk alone’ – that sort of affection towards an opposition player is very rare.