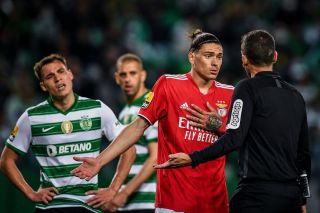 Manchester United have received a boost in their potential transfer pursuit of Benfica striker Darwin Nunez.

While I don’t think the Red Devils need to worry about Newcastle United or their Saudi owners in the transfer market, it is thought that they are already out of the running to secure a deal for the Uruguayan goalscorer, who has been strongly linked with a move to Old Trafford.

Newcastle emerged as an interested party in recent weeks, but the Telegraph claims Nunez has rejected an approach from the Magpies, with Eddie Howe set to turn his attention to Brentford striker Ivan Toney.

Nunez wants to play European football next season and that is believed to be the reason he turned down Newcastle.

More specifically, Nunez could want to join a Champions League club this summer, after starring in the competition with Benfica, which could also be bad news for the Red Devils.

United face a fight to qualify for next season’s Champions League and currently sit fifth in the Premier League. We will need to take a least a point from tonight’s trip to Liverpool to keep their hopes alive.

With over 30 goals to his name this term, it is no surprise that clubs such as United are being credited with interest in his signature. He is developing at a rapid rate and could easily be seen as an alternative to Erling Haaland, with the Borussia Dortmund striker set to join Manchester City.

But despite constant speculation over his future, Nunez is focused on Benfica.

“What the Liverpool coach [Jurgen Klopp] said, I take it as a compliment, but my mind is on Benfica,” Nunez told Portuguese broadcaster TVI, as cited by the Manchester Evening News. “I won’t say anything, and I’ll leave everything for this shirt.

“My job is to continue like this, to take advantage of this luck that is happening to me. Last year I didn’t play at all, but this year I’m having an incredible season.

“I have to continue like this, and there is also a lot of merit from my colleagues.”

Klopp said: “Extremely good-looking boy and a decent player as well. Really good, really good, I have to say.

“I knew him before, of course but he played pretty much in front of me with these tough battles with Ibou Konate.

“Physically strong, quick, was calm with his finish when he finished the goal off. Good, really good. If he stays healthy, it’s a big career ahead of him.”