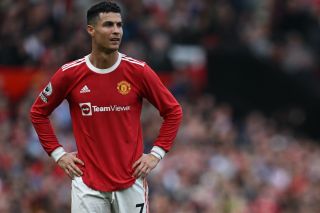 Manchester United will be without Cristiano Ronaldo for tonight’s game against Liverpool an Anfield.

Ahead of kick-off, the club have confirmed that Ronaldo will not feature following the devastating death of his newborn son.

Manchester United said: “Family is more important than everything and Ronaldo is supporting his loved ones at this immensely difficult time. As such, we can confirm that he will not feature in the match against Liverpool at Anfield on Tuesday evening and we underline the family’s request for privacy.”

In an Instagram post on Monday night, the 37-year-old wrote a message to his fans after his family suffered a tragic bereavement as one of his newborn twins passed away.

It goes without saying that football must take a back seat when it comes to such sad personal events, and we send our condolences to Ronaldo’s family.

However, when Ralf Rangnick takes his side to Anfield later this evening, he will be hoping to put a dent in Liverpool’s title hopes. By doing that, he will also aid United’s task at hand which is to finish in the top four.

Liverpool are pushing Manchester City all the way, with Jurgen Klopp in the hunt for his second Premier League title.

It’s a blow not having Ronaldo but we totally understand the decision to leave him out of the squad tonight.

Our thoughts are with Ronaldo and his partner Georgina.