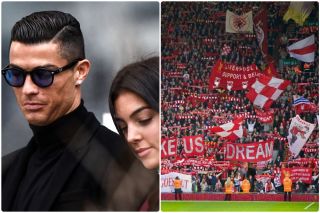 Tributes have poured in from all corners of the globe after Cristiano Ronaldo announced the tragic death of his newborn son.

This is, without question, one of the toughest moments a human can face, so Ronaldo has been given some time to spend with his partner Georgina and their family.

That means Ronaldo will miss tonight’s game against Liverpool at Anfield.

A fan-led minute’s applause will be held with both sets of supporters expected to join in to show support for Ronaldo.

While United and Liverpool share English football’s greatest rivalry, it is important to note that these plans were initially suggested by Scousers.

I'm hearing rumours Liverpool fans are going to give a round of applause in the 7th minute to show support for Ronaldo.
What a classy gesture this would be and I really hope we do it.

I've just read that Liverpool fans are going to clap in support of Ronaldo on the 7th minute of the game tonight, please pass it on to anyone who is going. Tragedy has no colours @LFCHelp

If you are attending like myself please applause on the 7th minute to show respect to Cristiano Ronaldo and is family through this heartbreaking time 💔😢 pic.twitter.com/8jtmCEhOna

Ralf Rangnick and United’s squad led a request to wear black armbands at Anfield for the 8pm kick-off.

Our thoughts and condolences are with Ronaldo and his family during this difficult time.