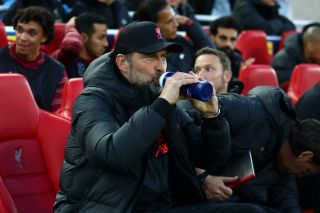 The 2021/22 season has been a disaster for United, but Klopp appears to differ – seemingly after watching few of our games this season.

I say that because the Liverpool manager has given a positive assessment of United’s squad after they’ve underperformed since the beginning of the campaign.

In his pre-match press conference, Klopp said: “We don’t face a team who has problems or whatever.

“We play Man United and if I go through the line-up, the goalkeeper is world-class, the last line is absolute top.

“I am not sure if McTominay or Fred can play, then it might be Pogba and Matic, for example. Let Pogba play and he plays through you and behind you and all these kinds of things.

“Then up front, you can choose… Sancho, Fernandes, Elanga or Rashford and a guy who now scored his 60th hat-trick [Ronaldo].

“I am not sure if Cavani will be ready, but that’s the team we face, that’s what we have to prepare for and not what happened last week or something like that.”

Klopp went on to encourage his players to be in the right mood when they face United. He is aware of the dangerous players we have available, although it has been confirmed this morning that Cristiano Ronaldo will miss the trip to Anfield following the tragic passing of his newborn son.

“We have had a couple of times better moments than other teams and they have given us a knock – that’s it with a better moment, who cares?

“They want to have the three points that we need, so that’s the attitude we need to show.

“We have to be angry in a good way and all these kind of things; greedy, really like you are if you have won nothing, like you would be with nil points and it is the most important three points in your life.”

None of us want reminding that this Liverpool side beat us 5-0 at Old Trafford earlier this season.

Rangnick should force his players to watch that game again – once or twice before kick-off tonight – because they can’t make the same mistakes again, or show Liverpool the same respect when they deserve none from us!