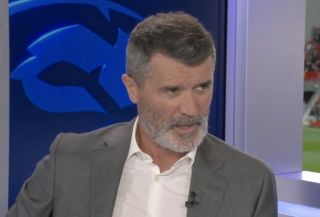 The Red Devils are in the process of preparing for a tense Premier League encounter at Anfield on Tuesday night.

Their rivals, led by manager Jurgen Klopp, will be chomping at the bit to do the domestic double over United after thrashing them 5-0 in the first fixture.

Not only will Liverpool want to beat United for the second time in the league this season, but they’ll also be keen to keep the pressure on narrow leaders Manchester City.

With Klopp’s Reds already winning the Carabao Cup, securing a place in the FA Cup final next month, reaching the Champions League’s semi-final stage and close to lifting their second Premier League title, the prospect of seeing them win a never-done-before quadruple is quickly becoming a reality.

Speaking ahead of Tuesday’s intriguing contest at Anfield, Keane, when speaking about the possibility of seeing his long-time rivals go one better than his own treble-winning season in 1999, admitted he is worried sick.

Roy Keane is ‘worried’ about a potential quadruple for Liverpool 🔴 #LIVMUN pic.twitter.com/DI8BwF3Y1m