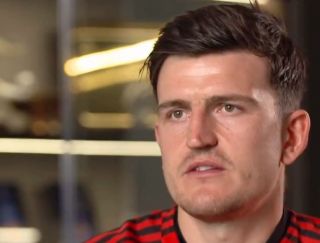 In an interview with Sky Sports ahead of Manchester United’s clash against Liverpool at Anfield, Harry Maguire has vowed to fight for three points.

The skipper was initially asked if there was motivation about disrupting Liverpool’s hopes of winning the Premier League, as well as the quadruple this season, but Maguire argued that you don’t need extra motivation when it comes to playing the Scousers.

“I don’t think that’s part of our motivation, to be honest,” Maguire said.

“I think the motivation is going to Anfield, playing against Liverpool and winning a football match and getting three points for this club and the fans.

“The fans have stuck with us throughout this season, they turn up in their numbers wherever they go, they’ve been amazing in such a difficult season.

“For us to go to Anfield, perform well and get the three points, it would be a huge moment for us to give to the fans. So I think that’s a big motivation for us.”

🗣️ "You don't need motivation to play in these games"

Harry Maguire says Manchester United are not motivated by denting Liverpool's quadruple bid as the fierce rivals prepare to meet in the Premier League tonight at Anfield… pic.twitter.com/tNjLYgRehK

There is no denying that it would hurt us to see Liverpool win the quadruple.

Maguire was then asked about losing 5-0 to Liverpool at Old Trafford this season, a game many of us would like to clear from history. He said it was one of the lowest points of his playing career.

“You don’t need motivation to play in these games. It’s such a big rivalry, when you join this club you know the rivalry, it’s one o0f the biggest in the world.”

Hopefully United will go out for revenge tonight.