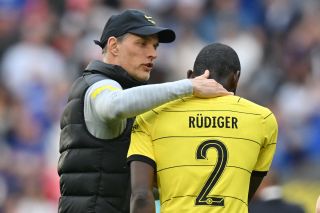 Antonio Rudiger is reportedly set to leave Chelsea on a free transfer this summer.

The Germany international was linked with a move to Manchester United following exploratory talks between his representatives and the club.

But talk of Rudiger moving to Old Trafford is expected to quench following a Manchester Evening News report which claims United are unlikely to convince the defender to make the switch.

United need to target the addition of a new centre-back when the transfer window opens, but nothing can be decided until Erik ten Hag is appointed manager, although it seems the ship has sailed in terms of signing the consistent Chelsea defender.

The Dutchman will need time to assess our targets and could have some recommendations from Ajax, who won’t demand the same money as Rudiger, who will be looking for a hefty salary package when he leaves Stamford Bridge.

According to The Sun, Ralf Rangnick was seen as an important factor in United’s chances of the centre-back, which we can now you tell you are very slim.

Rudiger is reportedly looking to speak to clubs with a guaranteed place in the Champions League. This is unfortunately something we have yet to secure this season.