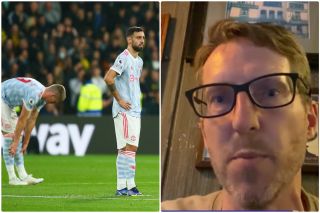 It has been a shocking season for Manchester United.

We have gone from finishing runners-up in the Premier League last season to sitting fifth, although Arsenal still have a game in-hand as both teams compete for the last Champions League spot with Tottenham Hotspur.

That’s a significant drop off from United but the club will look to turn a corner when Erik ten Hag is appointed manager.

Andy Mitten struggled to list positives from the season when asked by Sky Sports.

“We’ve got to suck it, we’ve got to live with it and you’ve got to have optimism,” Mitten said on air.

🗣 “We’ve got to suck it, we’ve got to live with it and you’ve got to have optimism.” @AndyMitten struggles to name the positives from the season from a Manchester United perspective. pic.twitter.com/BkTm4Ly9j0

Mitten suggestions that Raphael Varane’s unveiling at the beginning of the season was one of the highlights – and that is extremely telling!

The United We Stand fanzine editor stressed that he thinks Erik ten Hag has a huge job on his hands, with fears over whether the club will get things right in the coming years.

The fans don’t want to see another 2-3 years wasted only to find the team back where they are now.