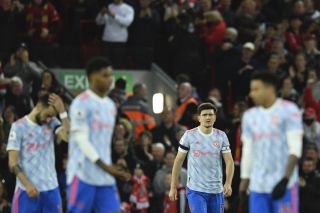 Manchester United are hardly covering themselves in glory against Liverpool on Tuesday evening, with Jurgen Klopp’s side comfortably claiming a 2-0 lead as they went into half-time.

Ralf Rangnick’s side were second best at every loose ball and didn’t muster a single shot at goal in the first 45 minutes – a damning statement that perfectly sums the team up this season.

As expected, United’s pathetic showing in the first 45 minutes drew a lot of attention on social media and supporters were not holding back in their assessments of this sorry squad.

Is there any other football club in history that has spent this much on players yet performed this bad?

From the manager all the way down, absolute disgrace. Worst Manchester United team in my lifetime!

What is truly unforgivable by Manchester United players is that they are second to almost every ball. That's not poor technique or poor coaching, that's lack of effort, hunger, fight. That's embarrassing. #mufc huge travelling support being let down again. #LIVMUN 2-0 #lfc h-t

I'd play Odion Ighalo at CB ahead of Maguire. At least he'd put a shift in.

Even the 0 yellow cards is embarrassing

Still struggling to fathom how Rangnick believes it will take just 2-3 windows to make #MUFC as good as #LFC. More like 23.

Nothing to say because there is so many things wrong on top of basic ability. Awful to watch such a pathetic team. #MUFC

If that point had not already been reached, these players are seriously running the risk of taking this to a point of no return. There are only a handful of players still tolerated by fans – most of them are completely disregarded.

Truth be told, the majority of the players on the pitch against Liverpool have little to no place in any United fan’s heart – that’s what it’s come to.