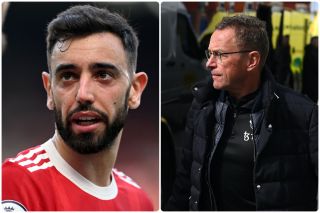 Ralf Rangnick has confirmed that Manchester United will be missing five players for Tuesday night’s game against Liverpool at Anfield, although he was pleased to report that Bruno Fernandes escaped a car crash without any problems.

The Reds take on Liverpool at 8pm tomorrow night and, ahead of the game, our interim manager met with journalists to give his pre-match thoughts.

United will be without Edinson Cavani, Fred, Scott McTominay, Luke Shaw and Raphael Varane. All five players missed the 3-2 win over Norwich City at the weekend due to injuries.

Speaking in a press conference, Rangnick revealed that all five remain unavailable for selection against the Scousers.

“Rapha [Varane] didn’t train with the team. He was on the pitch with one of our rehab coaches,” said Rangnick, as per ManUtd.com. “But with regard to injured players, we have the same situation that we had in the last two games.”

In regard to a car crash that involved United midfielder Bruno Fernandes, Rangnick added: “The accident happened on the way to Carrington. But as far as I know, nobody was injured. He trained with the team and he was okay, and that’s why I think he will also be ok for tomorrow.”

Fernandes has not been playing well this season, but it would be a real blow if his name was added to our list of injuries.

United are not in a position where they can afford to drop points, so whoever is called upon to start tomorrow’s game needs to put the work in. This lot beat us 5-0 earlier this season because we threw the towel in.