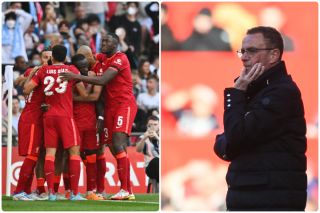 Manchester United will take on Liverpool on Tuesday night in the Premier League as the Red Devils look to break into the top four, while the Scousers push for the title.

Interim manager Ralf Rangnick is preparing to face a number of familiar faces at Anfield.

Although none of us like the fact Liverpool have been successful under Jurgen Klopp in recent years, it is Rangnick who could claim some of the credit since he signed more than a handful of the players currently starring at Anfield.

Sadio Mane, Naby Keita, Ibrahima Konate, Takumi Minamino, Roberto Firmino and Joel Matip have all worked with Rangnick in the past – at a time nobody knew them.

Rangnick knows his side will be up against it tomorrow night.

“They are good, they are extremely good,” Rangnick said (via GOAL).

“It’s no coincidence that they’re as good as they are. Jurgen has built that team over the last six-and-a-half years. Six or seven of those players used to be my or our players when we signed them for our clubs when nobody knew them.

“It’s no coincidence that this is probably the club with the highest number of players from our former clubs because their approach, their style of football, the way they want to play is pretty similar.”

Rangnick was sporting director of the Red Bull group between 2012 and 2020, where he worked with a number of footballers who are now Premier League stars at Liverpool.

You would hope that United will listen to his judgement when it comes to future transfer windows. It would be a shame not let his knowledge go to waste.

One response to “Ralf Rangnick claims credit for success at Liverpool”