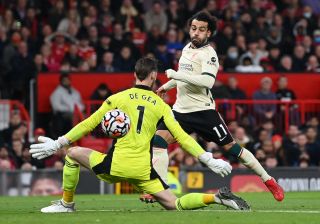 Manchester United will be looking to keep their top four hopes alive when they take on Liverpool at Anfield in the Premier League on Tuesday night.

The Reds go into the game on the back of a 3-2 victory over Norwich City at the weekend, whilst the hosts also ran out 3-2 winners over Manchester City in the FA Cup semi-finals.

Cristiano Ronaldo is widely expected to lead the Reds attack following a superb hat-trick against Norwich last time out.

Sitting just three points off Tottenham Hotspur in fourth place, Manchester United’s hopes of finishing in the top four at the end of the season are now looking increasingly possible.

Defeat to Everton a few weeks back looked like it all but ended the Reds chances, but with Arsenal and Tottenham dropping points over the weekend, it has let United back in with a chance.

Liverpool have enjoyed a fabulous season under Jurgen Klopp and currently find themselves sitting just one point off Manchester City in second place. Having already lost 5-0 to Liverpool at Old Trafford, we need no reminding of just how clinical and devastating Liverpool can be on their day.

United will be desperate to make amends following their heavy defeat to Liverpool earlier in the season and with top four now looking a genuine possibility, we know we simply cannot afford to drop any points and I don’t think we will do in Tuesday night.

Rangnick will likely look to make life difficult for Liverpool and put plenty of men behind the ball and if we can stop Salah and Mane then it would go a long way to stopping Liverpool. Last time round United gave Liverpool far too much space and possession in the final third and if United can really get at Liverpool this time and close them down then I think we can leave Anfield with at least a point.