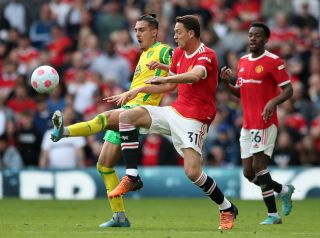 The biggest rivalry in English football.

Ralf Rangnick’s Manchester United side will hope to put a dent in Liverpool’s quest for Premier League success at Anfield on Tuesday night. In doing that, the Red Devils would remain in the race for the top four.

It goes without saying that the lads will need to perform significantly better than they did on Saturday, in the 3-2 win over Norwich City.

David de Gea will be looking for his first clean sheet in almost two months.

In the full-back positions, Aaron Wan-Bissaka could return to help United in the defensive department, but I fully expect Alex Telles to keep his place in the line-up.

Harry Maguire will be partnered by Victor Lindelof at centre-back.

After announcing plans to leave the club this summer, Nemanja Matic will sit in front of the defence. The Serb will be joined by Paul Pogba and Bruno Fernandes.

Cristiano Ronaldo will lead the line, while Jadon Sancho and Anthony Elanga hit Liverpool from the flanks.

Following Ronaldo’s devastating news, we no longer think he will make the trip to Anfield, so Marcus Rashford gets the nod.

Send us your scoreline predictions in the comments section.