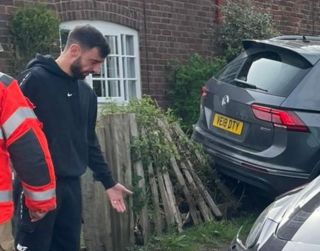 Thankfully, nobody was seriously hurt in the accident.

Manchester United star Bruno Fernandes was involved in a car crash this morning.

Fernandes’ Porsche collided with a Volkswagen, but he still went on to train at Carrington.

Interim manager Ralf Rangnick confirmed that Fernandes was fine after the crash and would be available for selection tomorrow night at Anfield.

Images have appeared of one side of the midfielder’s car sustaining damage, while the other car in the crash went into a fence.