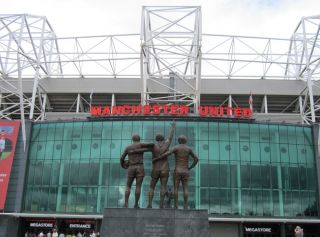 They say that with great power comes great responsibility, and this is even more true when that power is connected with being the coach of a major soccer team like Manchester United. The great teams of Europe are constantly under the lens of the scrutinisers – and the more disappointing – or simply, decent – their performances are, the (not so friendly) fire begins.

So, what are Manchester United’s real chances to make something of themselves this season? (spoiler: not good, but as a great soccer commentator used to say, the ball is round).

One of the worst periods for the Manchester team

The data is merciless: Manchester United has never won so little in the last 40 years, especially if we think the last trophy win was in 2017 under Jose Mourinho. A 45% win rate hasn’t been seen since 1990. This isn’t the first time the club has had to trudge to bring a title home: competition these days has become increasingly fierce, with big teams spending monstrous sums to grab the best players, and a dry spell is now natural. But Manchester United’s seems like a stretch.

If you love success, we suggest you cheer for another team. Since Sir Alex Ferguson’s retirement in 2013, the team has only brought home three trophies: in 2016, the FA Cup under Van Gaal, and the “flare-up” of 2017, where under Mourinho, they won the League Cup and Europa League. Then the furnaces went out.

Cristiano the phenomenon didn’t help either

The transfer of Cristiano Ronaldo to the Red Devils had raised hopes, but it seems that the Portuguese champion no longer has the bite he once had. On the contrary, he is proving to be more of a thorn in the side than an asset. On the occasion of the recent game against Everton (which had lost seven of their last eight games), Ronaldo reacted against a fan of the opposing team, showing that his nerves were on edge – and this certainly did not help the cohesion of the group nor its overall mood and chances to succeed.

Online bookmakers’ odds on the team have mercilessly dropped, testifying its sporting agony. The leading online betting centers are very precise indicators to know the value of a team, and how to understand and beat wagering requirements is essential to profit from good betting ratios. And we have to add that the current odds are not favoring the red-jacketed players: we would probably not bet on them, right here, right now.

The waltz of the technicians

A team in crisis normally panics. And one of the things that usually happens in football is to start firing the coach. Ole Gunnar Solskjaer was hired after Mourinho but did not produce anything good and was relieved and replaced by Ralf Rangnick, who, unfortunately for the team, did not manage to do better and is lounging on the exit door.

The most likely name after him is Erik ten Hag, who is working very well with Ajax (and who obviously continues to scoff). Still, another great candidate seems to be Mauricio Pochettino, who feels the atmosphere at Paris Saint Germain is getting hotter and hotter – and not conducive to good sleep, it seems. But it is evident that a radical change – both in the team and in the way of conducting it – is necessary to clean up the system and start again, starting from scratch.

Also, there will be important defections in the roster: Pogba’s contract is expiring and he does not seem willing to stay, as is Cavani. Ronaldo himself is increasingly impatient (and nearing the end of his career), and many others show their restlessness and reluctance to play on a losing team.

As it is pretty evident, the Red Devils need a big rebuilding job and to look for solid foundations on which to develop their future again, cleaning up the past – the golden periods must be archived, for better or for worse – and going back to building with an eye towards the future and not towards the immediate. It is now evident to all that the constant friction between the team, the coach, and the management (and the public) shows that this re-foundation is both necessary and urgent.

When the 2021/2022 season is filed, with a lukewarm result, Manchester United should possibly get rid of the “heavy” names and rebuild a team with a medium-term development plan and the support of a technician who can take care of the rebirth. A bitter medicine, but perhaps the only treatment to save the ailing patient.