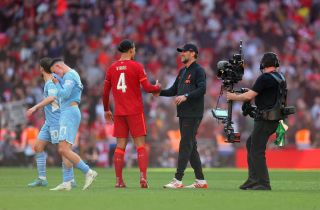 Manchester United have been in dire form this season. The lowest point was probably losing 5-0 to Liverpool at Old Trafford in September, something none of us want to experience again.

United travel to Anfield tomorrow night for another clash between the two fierce rivals.

Looking ahead to the game, Empire of the Kop writer Peter Kenny Jones

Dale: Do you think Liverpool can win the quadruple?

Peter: “Yes we can and we’re the only team who can which is a special achievement in itself. If we get past Villarreal then we’ve played every game possible this season and that’s a huge achievement too. I think we all have the opinion that it’s been an amazing season and no matter what happens now we’ve been great. Klopp told us all to turn from doubters to believers and that’s the mindset, remain realistic but believe that we can be the first team to ever achieve this goal.”

Dale: Klopp and Rangnick are obviously mates and there’s nothing we can do about that. Do you think it takes away from the occasion that we have two managers talking about their close relationship ahead of the game?

Peter: “There’s a lot of similarity with the relationship against Manchester City, there’s no needle in the games and it’s all about football. With United, it feels different because we’re not normally such huge favourites and with two managers that have a good relationship with each other this doesn’t feel like a ‘normal’ game against United. One thing’s for sure though, as soon as that first whistle blows all of our fans will ensure that both teams know that this is a massive game and not just for the three points at stake.”

Dale: After beating us 5-0 at Old Trafford, what are you expecting from United at Anfield?

Peter: “We have to expect to win every game, that’s where we are now and that’s what we need and especially in the Premier League. We’re so strong at Anfield but a draw would feel like a loss at this stage too. It’s all about how tired the players are and so I’d expect another fast start like at Wembley, to try and build a lead and be able to take a few players off and drop the gears again.”

Dale: Do do you fear for Liverpool when Klopp departs?

Peter: “Perhaps not fear but there is such a strong feeling of ‘enjoy this whilst it lasts’. The FA Cup final is our first in 10 years and that last one was under Kenny Dalglish, a year after Roy Hodgson had departed the club. Do we go with Pep Lijnders or Steven Gerrard next? Who knows but there seems to be a strong feeling that this is as good as it gets and it will never be this good again. Watching a side down the motorway fall apart after losing a legendary manager may have helped with that too!”

Dale: If you had to pick one to win this season: Premier League or Champions League?

Peter: “Easy, and the answer I think most fans would pick, the Premier League. Liverpool are built on European dominance and I would be Champions League for most seasons onwards but we all feel a bit of unfinished business with the ground being empty for the league win. No one can take it away from us and it means a lot but to be there would be great. We probably have more chance in Europe though and there’s no reason why we can’t win both. It’s a good choice to have to try and make.”

Peter: “Five players out for you and a full squad for us is big at this point of the season, should be another fast start and so I’ll go bold with 3-1 and a massive atmosphere at Anfield for a very important game.”