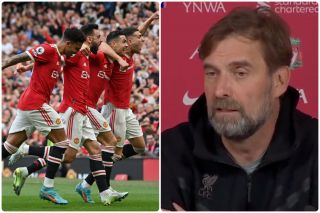 Jurgen Klopp looks ahead to what will be a massive game for both Liverpool and Manchester United on Tuesday night.

The German coach is anticipating an intense 90 minutes of football and predicts a tough fight between the teams.

It goes without saying that this is the biggest rivalry in English football – but sadly for United fans, Liverpool have enjoyed a lot more success in recent years.

United go to Anfield looking to build momentum to finish in the top four, whereas Liverpool are looking to win the Premier League title.

Klopp told reporters at his press conference (via Sky Sports): ”

🎙️ "It's a BIG game, two of the biggest clubs in the world face each other."

Jurgen Klopp says tomorrow's #PL clash is hugely important for both sides and #LFC will be expecting Man United to "go for it" 👇pic.twitter.com/6YZDUwkaRH

I won’t lie and say I’m looking forward to the game. That would be impossible after standing in the Stretford End and watching Liverpool beat us 5-0 earlier this season.

But we need to put that behind us — and many more performances — in order to get a result at Anfield.

It won’t be easy but it’s certainly not impossible.

Send us your scoreline predictions in the comments section below.