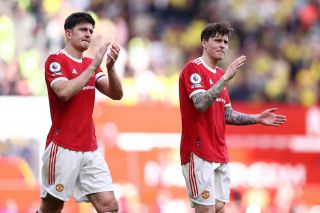 This comes a year after United signed Raphael Varane from Real Madrid.

Varane has excelled in the majority of his appearances since joining the club, but the Frenchman has missed 15 matches through injury or illness and is set to miss tomorrow night’s trip to Liverpool in the Premier League.

The Red Devils have already conceded 44 goals in the Premier League and one defender getting most of the blame this season is Harry Maguire.

Varane’s ‘preferred’ partner at the back has endured a disastrous season and the Manchester Evening News claims he could be stripped of the captaincy by incoming manager Erik ten Hag.

Ten Hag will have big decisions to make on Victor Lindelof, Eric Bailly and Phil Jones as well as Axel Tuanzebe. It is unlikely that any of the four will feature as regulars next season.

In fact, the same report from the MEN suggests that Bailly and Jones will be allowed to leave the club this summer.

Why has Maguire kept the captain’s armband this season?

I don’t think there was any reason to change the captaincy midway through the season. It’s too big of a call for an interim manager to make when he knows that his duration in the hotseat is only six months.

It was always something I wanted left for the next manager.

And, I really can’t see Ten Hag sticking with Maguire as his captain next season. Some time out of the spotlight might help rediscover his club form.