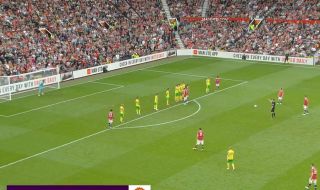 Cristiano Ronaldo’s match-winning free-kick against Norwich City is among the Premier League’s best goals of the week.

The Portuguese superstar completed his 60th career hat-trick against Norwich with a stunning free-kick to give Manchester United a much-needed push in our race for top four.

Ronaldo’s hat-trick was crucial in United’s win over Norwich City, just like it was when we took three points from Tottenham Hotspur last month.

It has been listed as one of the best goals scored in the Premier League at the weekend.

The other goalscorers credited with scoring brilliant goals at the weekend include Bruno Guimaraes, Emmanuel Dennis and Leandro Trossard.

However, the pick of the bunch in my opinion, has to be Ronaldo’s free-kick to beat Tim Krul.

🚨 GOALS OF THE WEEK ALERT 🚨

Let us know what goal you think is best in the comments section.