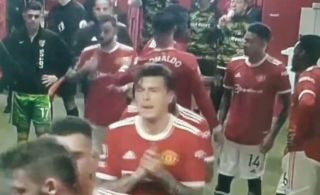 Cristiano Ronaldo is a leader on and off the pitch.

The Portuguese star proved that again on Saturday in the 3-2 win over Norwich City in the Premier League.

A Manchester United fan spotted a brilliant moment where the five-time Ballon d’Or winner shares fist bumps and encouraging words with all of his team-mates before heading out of the tunnel.

The fan, who caught the footage, tweeted: “Cristiano Ronaldo doesn’t need the armband to be Manchester United captain.”