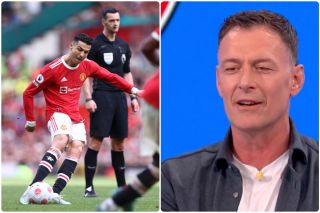 Retired footballer turned pundit Chris Sutton was made eat his words in the BT Sport studio this weekend.

The former Chelsea striker dismissed Ronaldo’s free-kick before the United star even stood up to take it.

Ronaldo’s free-kick made it 3-2 against Norwich City as United clinched three crucial points in the race for top four.

Sutton points out that Ronaldo’s record from free-kicks hasn’t been great over recent years, saying: “I can’t remember the last free-kick he scored, so he’ll probably score this one.”

Just seconds letter, the ball hits the back of the net! Sutton could only laugh.

Another hat-trick for Ronaldo

Ronaldo scored his 60th career hat-trick on Saturday – his second in the Premier League this season.

There was no stopping him yesterday, but he will need to be at his clinical best again on Tuesday night, when United travel to face Liverpool.