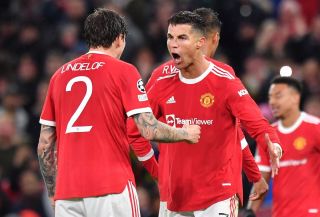 Following surprise defeats for both Tottenham and Arsenal, three points were vital for United if they have any ambition of featuring in next season’s Champions League.

Norwich made a valiant effort but Ronaldo’s brilliance was enough to secure all three points for United. The three-goal show against Dean Smith’s side was his 50th club career hat-trick, 60th overall and the third goal was his 21st of the season. He has now scored 20 goals or more in 16 consecutive seasons.

“I mean it’s just unbelievable, and the way he keeps on scoring goals is unbelievable,” Lindelof said on Ronaldo after the game, according to The Mirror.

“But, I mean, we’re seeing every day the work he puts in and the way he takes care of his body. His mentality is just unbelievable, so I’m not really sure what else to say.

“Especially at this stage of the season, the three points is very, very important. Obviously the results elsewhere were in our favour, so we’ve just got to stick to it. We need to try to win as many games as possible and hopefully we can finish in the top four. I thought we made it a little bit too difficult for ourselves, but we got the three points, so that’s the most important thing.”

SN’s verdict…
As things stand, a top-four finish is still unlikely but it gives United a fighting chance, which many thought they had given up after the shocking 1-0 defeat to Everton last week.

United will need Ronaldo in his best form next week as well, with two crucial fixtures coming up against Liverpool and Arsenal. Jurgen Klopp’s side are challenging at the top of the table whilst Arsenal are one of United’s main threats for a place in next year’s Champions League.