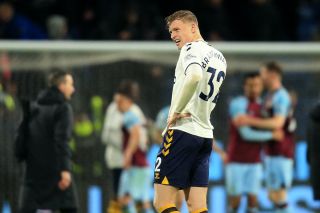 Manchester United have been linked with a move for Everton defender Jarrad Branthwaite.

The Red Devils have leaked goals all season but there is an understanding that the team is missing a defensive figure in midfield. An anchor to sit in front of the back four at the very least.

I’m not saying that by signing a defensive midfielder, a defence can suddenly turn into something formidable, but it’s important presence that we don’t have in our team. Nemanja Matic is 33-years-old and he has already announced that he will be leaving Old Trafford this summer.

One solution would be to sign a defensive midfielder and a new centre-back.

According to the Daily Mail, United are targeting Everton’s Branthwaite, despite him not breaking into the first team on a regular basis just yet. Our transfer budget could depend on Champions League qualification, so they could target younger players on the cheap to rebuild their squad.

The Daily Mail adds: “They have drafted a list that includes internationals but are also looking at young players with potential to develop who could be prised away for figures towards the lower end of their budget.”

Branthwaite, 19, has only made eight first team appearances in the league since joining the club from Carlisle in 2020. He currently has a number of defenders ahead of him in the pecking order, but the problem there is they haven’t got many strong options.

He stands tall at 6ft 5 in and has the physical stature that we should be looking to bring into our squad this summer.

That said, playing an inexperienced 19-year-old in the top-flight when you are in the middle of a relegation dog fight would not be seen as the brightest idea.