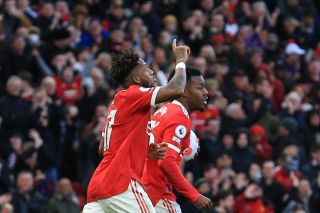 Manchester United midfielder Fred has emerged as one of the club’s most important players in recent months, with his absence against Norwich earlier this weekend proving to be a big loss in the middle of the park.

The Brazil international has cut a frustrated figure at Old Trafford at times and although a lot of the criticism of Fred has been unfair, he is now starting to prove exactly why Jose Mourinho and Ole Gunnar Solskjaer were so keen on having him in the side.

The 29-year-old has now opened up on his improvement, particularly under Rangnick, and admits that communication with the German manager has been vital.

“The manager is always talking to me, telling me to work between the lines to find space behind the opposition’s midfield. That’s where I play for the Brazilian team, as well, sometimes a bit further back,” he’s quoted as saying by the official Manchester United website.

“I like playing there to contribute with goals and assists. It’s my preferred position, closer to goal, carrying the ball, playing passes into my teammates to score.

“I think I’ve adapted well in the position in the team. The manager is always encouraging me to put in big performances and play important passes to help the team. Confidence is everything. I hope to keep it up.”

SN’s verdict…
There are a couple of areas on the pitch where United desperately need to improve over the summer and midfield is one of them, but that’s not a dig at Fred. He’s had to overcome a lot of criticism over the years and he’s almost certain to be a part of the new manager’s plans.

Erik ten Hag is expected to be named the permanent successor to Ole Gunnar Solskjaer imminently and we won’t know for sure until the squad has been assessed but there’s not a lot to suggest otherwise.