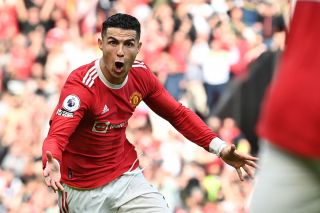 Cristiano Ronaldo stole all the headlines over the weekend with his breathtaking hat-trick against Norwich City – it was the Portugal international’s 50th in his club career and 60th overall.

Furthermore, the three-goal show took his tally to 21 for the season, making it the 16th consecutive year in which he has scored 20 or more goals.

The three points on Saturday made sure United still have a fighting chance this season, with just three points separating themselves and fourth-placed Tottenham.

Arsenal, who were clear favourites to clinch that last Champions League place just weeks ago, have seen their season take a turn for the worse, losing four games out of their last five. Gunners legend Ian Wright has now admitted that his former side are missing a player like Ronaldo, arguing that United owe their league position to the 37-year-old.

“He’s (Ronaldo) got 13 points alone from winning goals that he’s scored for them. That’s what you get at Man United,” he told Premier League Productions, via the Manchester Evening News.

“That’s exactly what Arsenal need, because if he wasn’t playing for United they’d be nowhere near where they are. That’s what you pay for and that’s what he’s delivered, he’s amazing.”

SN’s verdict…
Ronaldo’s homecoming hasn’t gone quite as planned but the veteran forward shows his class time and time again, with the latest showing proving his status as one of the greatest players of all time.

United will need him in his best form once again next week, with two crucial games against Liverpool and Arsenal coming up. The fixture at the Emirates Stadium will be particularly important, with the loser of the 90-minute affair potentially out of the race to play in next year’s Champions League.