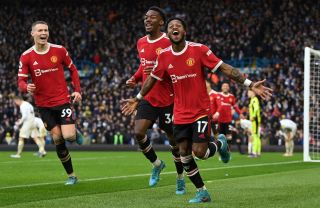 Manchester United midfielder Fred has come on leaps and bounds in the last couple of seasons, with the last three months under Ralf Rangnick perhaps being his most impressive since joining the club in 2018.

His good form for United has seen him become a regular for Brazil, starting all of their important games whilst Liverpool midfielder Fabinho is made to watch from the bench.

After overcoming a tough first season at the club, he has now reached 100 Premier League appearances for United and was asked by club media to recall his favourite of the century of games.

And there were no surprises when he named the 1-0 win over Crystal Palace earlier this season, Rangnick’s first game in charge, as his favourite.

“That’s tough, as it’s difficult to choose a specific game from the one hundred I played in. I think a special game was this season against Crystal Palace, when we won 1-0. It was a great atmosphere, we won and I scored the winner,” he is quoted as saying by the official Manchester United website.

“I think it was a standout game. I also remember the derbies, beating City 2-1 away was a great game. There are a lot of historical games to remember, and it’s really important for my career to have reached 100 games.”

SN’s verdict…
The win at Manchester City was arguably the performance that convinced fans that a corner had been turned with the Brazilian so it’s understandably one of his standout moments.

The 29-year-old is currently out with a muscle injury and his absence was noticed in the 3-2 win against Norwich earlier this weekend. Without a recognised ball-winner in midfield, usually Fred or McTominay, United were wide open and extremely vulnerable on the counter-attack.

Rangnick will hope to have his main man in midfield back sooner rather than later, with a tough run-in to come as United chase down a place in next season’s Champions League.